Chinese people made up between one-quarter and one-third of Idaho’s total population. In 1885 through 1886, an Anti- Chinese attitude exploded and was often led by the Knights of Labor, an early labor union. Chinese immigrants first came to Idaho as railroad and mine workers. Many of these workers settled permanently in Idaho and took other jobs. In 1886, a large Anti-Chinese convention was held in Boise and violent expulsion of Chinese people spread through the state. 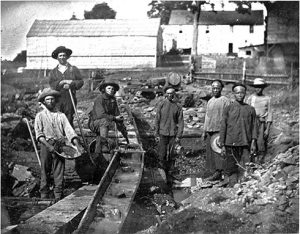